Sarvdaman Patel is one of the most renowned & respected agronomists in the country. He is one of the pioneers of the Organic & Biodynamic movement in India & his unique contribution is to demonstrate that Organic Farming can be practiced without sacrificing productivity.

Sarvdaman holds a Bachelor’s Degree in Agriculture & Animal Husbandry from Pant University. He proceeded to do his Masters in Agronomy at University of Wisconsin, Madison USA & apprenticed for 18 months in three different dairy farms in America.

Starting His Own Farm

Sarvdaman got a Green Card & had the opportunity to settle down in the USA. However, the pull of his sacred land was too great. He came back to India in 1975, to start his own farming enterprise on this 40 acre land.

Sarvdaman was not an Organic Farmer in the initial years. He had made some attempts at going Organic in 1995 without great success. The real foray into organic farming came from three things that happened on his farm. The first was a gradual depletion of yields in spite of using fertilizers and the diminishing health of the soil and the animals. The second was when a farm worker got poisoned (& lived to tell his tale) when spraying a pesticide. The third was when pesticide residue on the fodder caused illness in a large number of cows. Taking these as signals from the heavens, Sarvdaman started reading voraciously about Organic Farming and took, in the year 2000, an informed and whole hearted plunge into Organic Farming. He has never looked back since. The bounteous earthworm population, the beautiful condition of the soil, the health of the animals, the many winged visitors that visit the farm are all testament to the success of this part of his journey. The benefits were noticeable in the first year itself- the foot and mouth disease outbreaks, which occurred regularly and affected the whole herd, affected only 21 animals out of the 75 in the first year of going organic and have not occurred ever since despite stopping the vaccinations completely.
Peter Proctor, who is considered the father of modern Biodynamics, stayed on this farm for almost a year in 2005 and helped turn it Biodynamic.

This perfect farmer is also a great and generous communicator. He has a large following of apprentices and trainees who try to latch on to his every word. He has many amusingly delightful tales from his years of a contented and joyous farm life. He is a gifted story teller and loves to relate these anecdotes in the evenings over a hearty laugh and glass of the good spirit. Read about these anecdotes in a soon to be published book 'Chased By A Bull and Other Cock and Bull Stories'.

Currently he is the President of BDAI. His knowledge is widely sought out at expert panels and training programs. He is a farming consultant to the Tibetian settlements and a teacher at BASIL, Mysore. 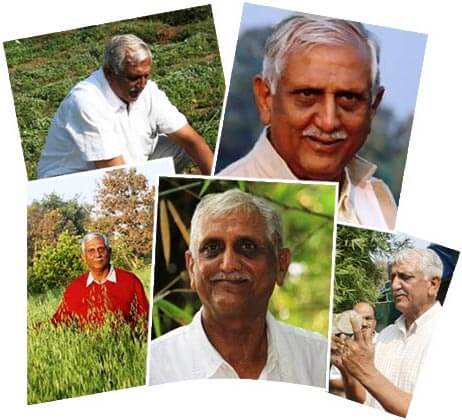